Annapurna Climbing experience is one of the deadliest and the best climbing experiences one can ever have. Annapurna Climbing presents the climbers with all the challenges that they could imagine to come across during an ascent. While some climbers are able to handle all of them, a lot of others are overwhelmed by them. The reason why Annapurna climbing is considered as the deadliest climbing experience is because it has a fatality rate of about 38%, which is the highest in the world, when compared to the other mountains, even the ones that are much taller than Annapurna.

Annapurna Climbing is one of the most adventurous experiences that you could have if you’re into mountaineering. Annapurna Climbing is tough, it’s adventurous, it’s deadly, but it’s also the best peak climbing venture that you’d ever be a part of. Annapurna Climbing, which is a 56 days long journey, takes you through a roller coaster ride. Altogether, the core climbing duration is 35 days, and apart from that, you’ll trek for a period of 12 days, covering sections of both Annapurna Circuit trek and Annapurna Base Camp trek routes. Apart from these days, the mountaineers spend their time either relaxing, moving around, acclimatizing or enjoying. Annapurna Expedition is considered as one of the toughest journeys to embark upon. Though the peak is the 10th highest in the world, Annapurna Climb’s difficulty level surpasses that of Everest and K2. You should go for Annapurna Expedition if you love taking risks. Annapurna climb can be the next chapter in your book of impossible feats that you’ve conquered.

Why Is Annapurna So Deadly

To answer the question, why is Annapurna so deadly, well, it has all the factors that make mountain climbing an excruciating pain. Annapurna is a peak that is full of crevasses, seracs, and unstable masses of ice. A lot of times trekkers fall prey to these land masses, and when these break off and fall, they either land up injuring the trekkers, or killing them. Annapurna massif is an isolated mountain range, and so, it is tough to get help in case a medical emergency arises. So, the climbers have no one to depend on.

Annapurna climbing is considered a tough nut to crack also because of unexpected and continuous avalanches. The mountain is prone to it and many climbers have lost their lives in terms of Annapurna climbing especially because of this phenomenon. Similarly, the climate on the peak is cold, windy and extreme overall, with snowfall occurring in all seasons. Every mountaineer knows how hard it is to climb a peak when the weather is unpredictable. Climate as such doesn’t just prevent you from ascending the mountain, but may also have fatal consequences on the health of the climber.

Apart from these two attractions, you will also come across numerous villages like Sinuwa, Deurali, Ulleri, and so on. Settled among the hills, these villages aren’t just naturally gifted but culturally as well. These are homes to people belonging to numerous indigenous tribes, with their own unique cultures and traditions. They have been living here for centuries.

Annapurna Base Camp trek also covers Poon Hill, which is yet another amazing viewpoint of the Annapurna region. You will also visit villages of Ghorepani and Ghandruk. Quite like the settlements mentioned above, even these are quite pleasing aesthetically. The entire trek is a part of Annapurna Conservation Area Project, which is one of the richest protected areas of Nepal, when it comes to wildlife and vegetation. So, during the journey, you’ll definitely feel more connected to nature.

One of the most significant attractions of the trek is Muktinath, which is a significant pilgrimage site for Hindus and as well as Buddhists. Another crucial feature of the trek is Thorung La Pass. Situated at 5416 m, it is one of the highest altitude passes in the entire Himalayan region, and undoubtedly, one of the toughest to reach and cross. 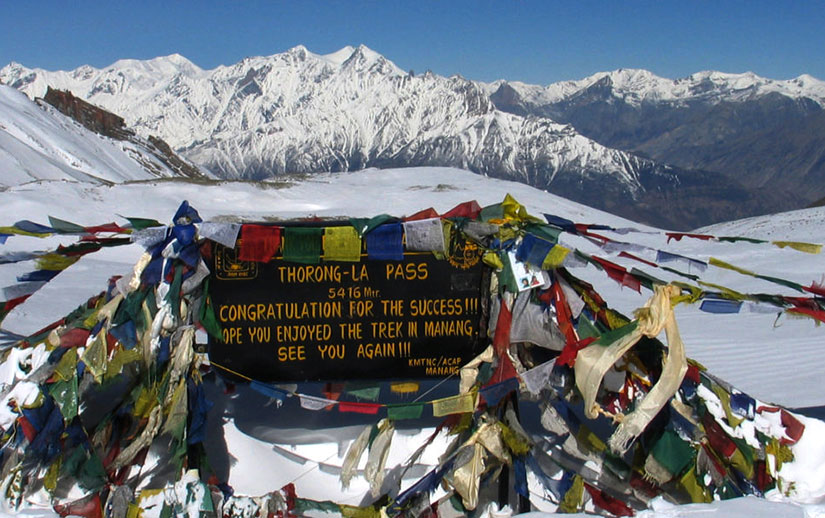 Annapurna Circuit also covers different villages of Mustang district, such as Kagbeni, Manang, Jomsom and so on. Historically, Mustang was a separate state back in the days, which had its own government and a monarch. It became a part of Nepal only around 70 years ago. A journey to this forbidden land makes us experience a roller coaster of emotions, mostly good ones. Throughout the trek, you’ll notice the impact of Buddhism on the region. On the route, you’ll come across different elements like mani-walls, chortens, stupas, monasteries, and so on, which act as evidence to this fact.

Annapurna trek difficulty level, without a doubt, is challenging. It has all the factors that contribute to increasing a trek’s difficulty level. For instance, high altitude, long duration, extreme climate, rough terrain, and so on. One of the most essential things to consider before going for this trek is the possibility of altitude sickness.

Since the journey keeps you above 3000 m for a duration of 6 days, there’s a fair chance that you might suffer from altitude sickness, which will make your journey further challenging. If you’re not careful enough, even extreme climate has the potential to make you fall sick. When you go for the trek, you have to consider the season.

Going for the trek during the wrong season could make you face harsh climate, and things could turn out to be fatal for you. In the same way, walking for days, on uneven, rough, and steep terrain can also give you a hard time, making your trek quite difficult, which is quite the case in the context of Annapurna Circuit trek. Considering all these aspects about the journey, it can be concluded that Annapurna trek difficulty level is strenuous.

A lot of times during the journey, when the trekkers get too tired and they feel that they’re unable to move forward, they want to give up and quit. At that time, it’s the guide who would come up to you, and try his best to motivate you. In that situation, you’ll realize that you’re all energized and filled with encouragement to continue on your trek. And that his mere words were enough. This is something that can be achieved only with an Annapurna Circuit guide by your side.

Annapurna Climbing is the best choice for the individuals who are always looking for challenges; in this case, taming an untamed beast. Though many have attempted Annapurna Climbing, and have been able to reach the top, there are many who have fallen prey to this deadly beast. With a 38% fatality rate, it teases all the adventure seekers to try and attempt climbing it by risking their lives, putting it on the line. So, if you’re a mountaineering enthusiast, and looking to explore new dimensions of mountain climbing, Annapurna climbing can prove to be the best option for you. However, make sure that you do proper research, and take expert consultation before your Annapurna Climbing. It’s a guarantee that the level of excitement and pride that you’ll feel when you reach the top, there’s no other feeling beating that.

Some frequently discussed topics besides Annapurna climbing are:

Breeze Adventure is the perfect travel partner that you can have if you’re looking to go for climbing or trekking in the Annapurna region. They’re experienced, trustworthy, affordable, and they focus on client satisfaction. One of the most admirable features of Breeze Adventure is that they allow their clients to get involved in the itinerary designing process, which makes the journey quite personal, catering to all their needs. Apart from trekking and expedition, they also offer luxury tours, helicopter tours, mountain flights, and other forms of tours. Their itineraries feature the most popular and off-the-beat tourist attractions in countries like Nepal, Bhutan and Tibet. If you’re looking to spend your vacation in any of the Himalayan countries, make sure to choose Breeze Adventure as your travel partner. With them by your side, your holiday will never be the same again.