Annapurna Circuit Trek gives you an opportunity to walk through the Himalayas and explore its glory. The mountains in the Himalayan region are humongous; they are pure, and they give life to nature, through the glaciers and rivers that are born from its cracks. Mountains are regarded as the universal symbol of challenge, and when someone overcomes a challenge, they attain acclamation. Overall, the Himalayas are the epitome of glory, and thus they’re the pride of the nation and the whole wide world. And the peaks in the Annapurna region are no different.

Especially when it comes to Annapurna Circuit trek, which is conducted in Annapurna region, the home of few of the most legendary mountains in the world, also the highest ones, you get to experience the Himalayas in their best possible form. Though Annapurna Circuit trek difficulty level is challenging, once you complete the trek, you’ll be left with extreme excitement and a sense of accomplishment, rather than exhaustion and stress.

Annapurna Circuit Trek Nepal is a trek that has uncountable number of attractions. To cover all of them, one has to take multiple trips of the region. However, knowing about all of them, and especially their major features is possible through the Annapurna Circuit Trek Map. It gives you basic information like the number of core trekking days, villages covered, altitude reached, and so on. 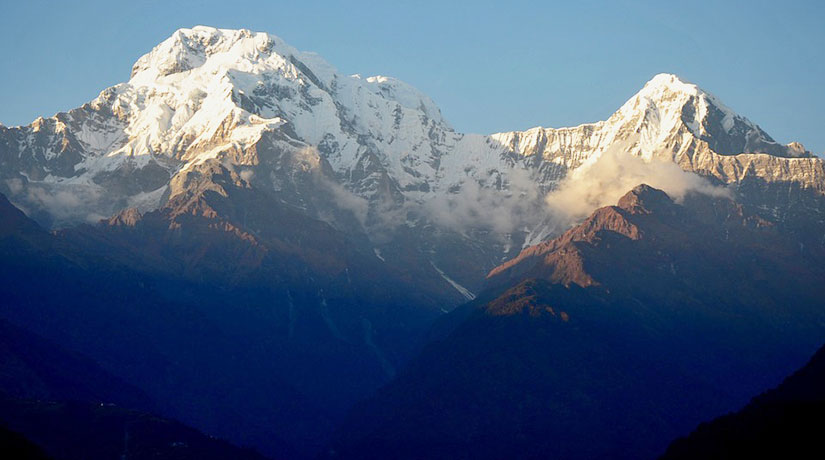 Altogether, Annapurna Circuit Trek is 14 days long trek, and in this duration, one day is assigned for acclimatization. The trek starts from Chamje and ends at Syane. The major villages covered in the route are Dharapani, Yak Kharka, Manang, Pisang, Sikha and so on. These villages won’t just give you excellent food and accommodation facilities, they would also enlighten you with the knowledge about the people here, their cultures and their religious beliefs. All these settlements offer you the most enticing views of the peaks of Annapurna region. You’re sure to have the best time staying here.

Other Treks In The Annapurna Region

Annapurna Region is famous for not just Annapurna Circuit trek but so many others as well. The best way to explore the area is to give each one of them a shot. These are few of the most popular routes of the Annapurna region that you definitely need to give a shot. 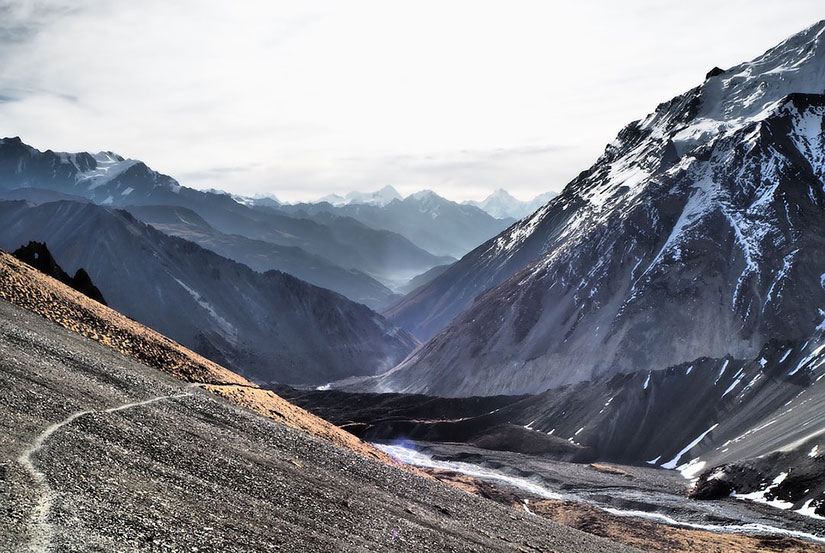 The villages that you’ll cover during the trek are Ulleri, Jhinu Danda, Sinuwa, Deurali and so on. ABC trek is also one of the most picturesque treks in the Annapurna region, as throughout the time you hike through lush green forests, with colorful flowering trees, river and waterfalls. It is also one of the easiest treks in the region, however, the day when you cover Annapurna Base Camp can be particularly tough.

Khopra Trek is a short yet beautiful trek that lets you explore one of the unexplored and underrated routes in the Annapurna region. The major attraction of the trek is Khopra ridge, which lies at an altitude of 3660 m. It offers the most amazing panoramic views of the surrounding hills. Another attraction in the area is Khayar Lake, which is a high altitude mountain lake, situated at an elevation of 4540 m. To reach the lake, you need a take a side trek towards the north of Khopra Ridge.

On the trek, you will cover villages such as Tadapani, Bayelikharka, Swanta Village, Upper Chistibung, and so on. The trekkers also visit Ghorepani, Poon Hill, and Ghandruk, which are three of the major destinations of Ghorepani Poon Hill Trek. As a matter of fact, Kopra Trek can be considered as an extended version of the same trek.

From the top of Poon Hill, you get the most outstanding views of the peaks of Annapurna region. You also get the panoramic views of the surrounding hills and settlement areas, located at a distance. Apart from Pooh Hill, the other two major destinations of the Ghorepani Poon Hill trek is Ghorepani and Ghandruk. Beautiful villages situated at scenic settings. The villages don’t just offer you beauty, good food and accommodation, but also an insight into the culture followed by the locals here.

The majority of people living in the region are Gurungs, who are one of the indigenous groups of Nepal. On the trek, the other villages that you’ll visit are Ulleri, Tadapani, Nayapul, and so on. Altogether, you’ll spend around 4 days on the route, which makes it quite a short journey. Due to the short duration and easy difficulty level, this trek is an ideal one for people from all walks of life. Probably, this is the reason why the trek is so popular.

Nar Phu Valley Trek takes you to the magical land of Nar and Phu, which are the names of villages, and as well as high altitude passes. When you go from Phu village to Nar Village, first you’ll come across Phu pass, then you’ll come across Nar pass. The altitude of both the passes are 5050 m and 5400 m respectively. On the trek, you’ll also come across Kang La and Thorung La, which are two other high altitude mountain passes, situated at an elevation of 5306 m and 5416 m respectively.

Nar Phu Valley touches and covers a small segment of Annapurna Circuit trek, i.e. the segment from Manang to Jomson. Altogether, the trek lasts for a duration of 13 days, out of which, two days are assigned for acclimatization. The high altitude covered in the journey, and the number of core trekking days in the journey make it a difficult trek.

Jomsom and Muktinath are two of the most significant tourist destinations in Nepal. The former one is a picturesque town, and the capital of Mustang district, and the second one is an important Hindu pilgrimage site. Since it barely touches the Mustang region, Jomsom Muktinath Trek also goes by the name of Lower Mustang Trek. Mustang region was once an autonomous state, and had its own monarch. During that time the kingdom was known as the forbidden land. So many stories and folk tales from this era are widely shared by the locals. 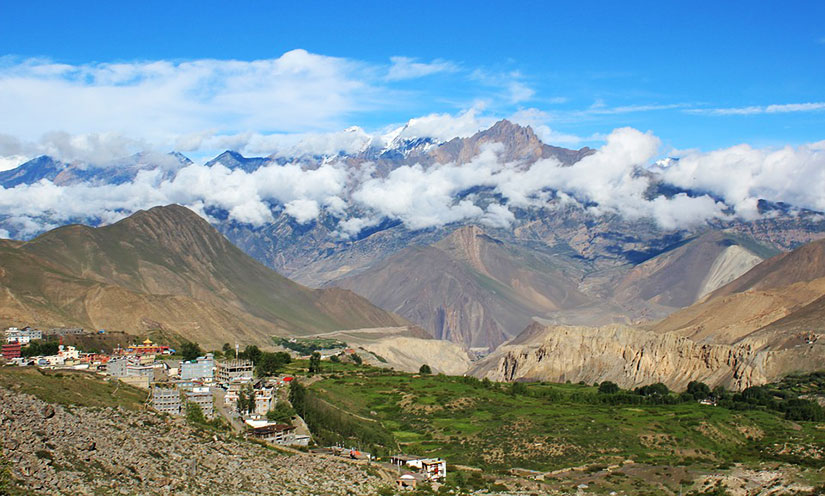 Altogther, the trek lasts for a duration of 7 days, and in this time, the trekkers pass through the villages of Marpha, Kagbeni, Totopani and so on. Marpha is yet another beautiful village in the region, and the place is famous particularly for its apples. Similarly, Tatopani is known far and wide for its natural hot water springs that is considered to have medicinal properties. Trekkers generally tend to take a dip and relax in the pool after a long and tiring day.

Tilicho Lake is one of the most prominent high altitude lakes of Nepal, situated at an elevation of 4919 m. It is also considered as the highest altitude lake in the world, considering its size. To visit the lake you need to go for the Annapurna Circuit Trek, and take a two days long side trip from Manang. On the trek, the trekkers come across three significant attractions – Khangsar Village, Tilicho Peak Base Camp and Tilicho Lake. While the former two serves as the rest stop for a night, the trekkers prefer to take only a day trip to the Tilicho Lake.

Serving as the first base of Tilicho peak, Tilicho Peak Base Camp offers few of the most splendid mountain views in the region. The peak’s height is 7134 m, and the base camp’s elevation is 4150 m. Khangsar, on the other hand, is a beautiful village, situated in a setting that is surrounded by peaks that mostly remain white throughout the year. 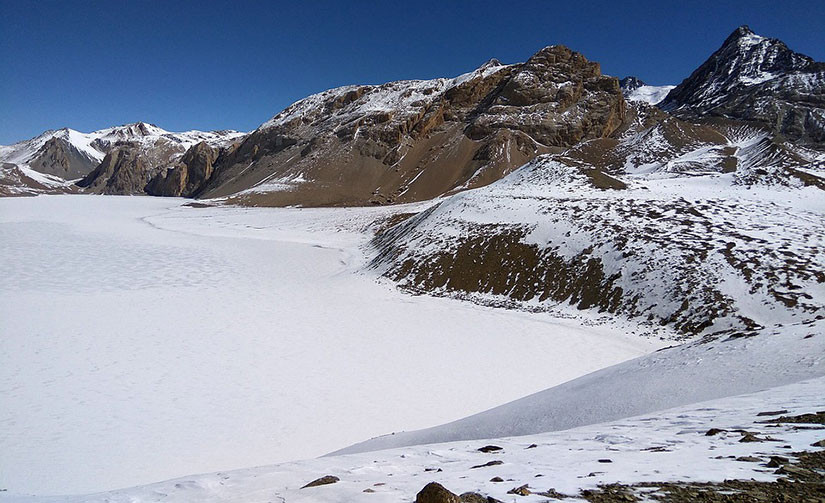 Whether you’re a trekking enthusiast, or someone who wants to give trekking a try, you should definitely go for Annapurna Circuit Trek. If you’ve already tried trekking on this route, try out the others in the region as well. It will not just be worth your time, but also give you unforgettable memories. It’s a guarantee that you’d want to stay immersed in the region, or would want to return time and again, and rejoice the glory of the Himalayas.

Breeze Adventure is the ideal travel partner especially when it comes to trekking in Nepal. Whether you’re a trekking enthusiast, or someone who prefers luxury travel, Breeze Adventure can assure you a package that will not just offer you a sense of joy and adventure, but pride as well. The company is composed of tour operators who are experienced, and who know the ins and out of every popular or unexplored trekking destinations in Nepal. The agency also specializes in tour packages that are focused on the most traveled tourist spots in Tibet and Bhutan. If you’re looking to travel in this part of the world, make sure that you have Breeze Adventure as your travel partner.