The popularity of Trekking in Nepal draws many visitors to the country year after year. The Annapurna and Everest regions by far see a large number of trekkers. For those seeking some solitude and a feel of remoteness, nonetheless, Nepal does offer trek routes that can be rightfully coined as Remote Area Treks in Nepal.

Unlike the popular routes that come with well-trodden paths and facilities for accommodation and food, Remote Area Treks in Nepal have their distinct attributes. Off-the-beaten-paths, pristine wilderness, and remote villages are but some of their common characteristics. In fact, some of these expeditions still demand camping and travelers hardly see other visitors on the trails.

Away from the busier routes in lands distant and isolated, the following is a list of the 10 Best Remote Area Trekking in Nepal. 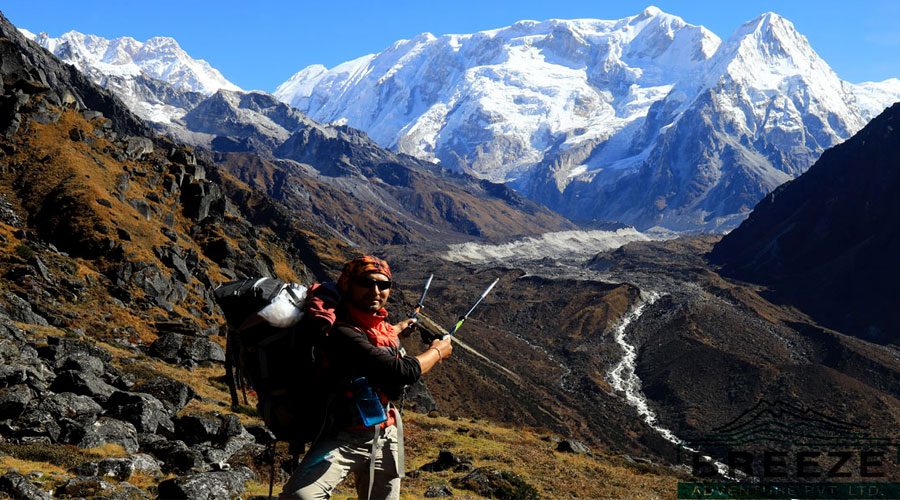 Kanchenjunga Circuit Trek, considered as one of the best treks in Nepal, takes trekkers to both the North and South Base Camps. Along the trail in the wild, remote villages, the rich flora native to Kanchenjunga Region starts out as subtropical forests and reaches the alpine grasslands before the tree line. The glaciers – including Yanglung and Kangchen; the rivers – Tamur, Simbua and Ghunsa; and the high passes – Sele-La and Sinon-la en route all add to one's experience.

Kanchenjunga Circuit Trek comes with a total route length of around 225 kilometers to be completed in 21 days of walk. The average walk per day is around 5 hours.

Applicable to all foreigners, a trek into the lands of Kanchenjunga requires an additional special permit issued through a registered Trekking Agency as well as the company of a licensed trekking guide. 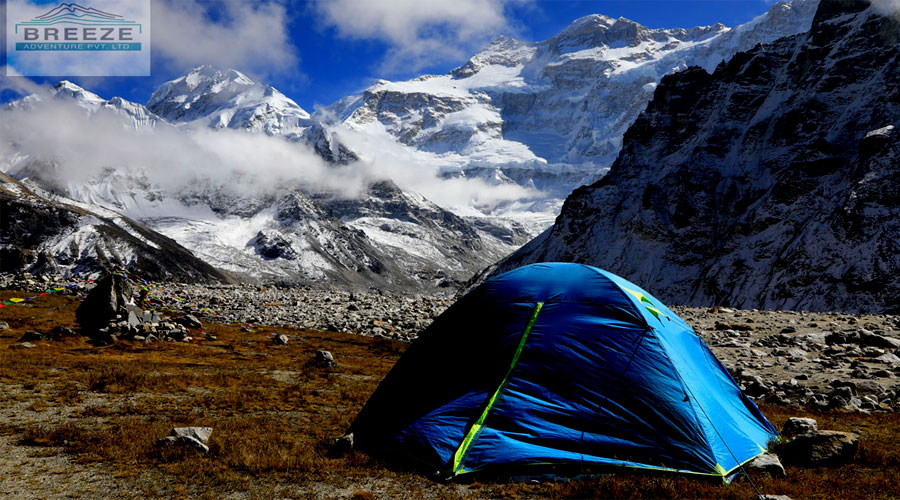 Located in the extreme north-eastern parts of Nepal, the Kanchenjunga region is ideal for travelers seeking some solitude in their expedition. Kanchenjunga North Base Camp Trek takes visitors to Pangpema (5,140 m), the North Base Camp of Mount Kanchenjunga, third on the altitude scale at 8,586 meters from sea level. Although two-thirds of the land is only rock and ice, the trail at lower altitudes passes through lush forests and, eventually, reaches barren lands higher up. As the trek gains altitude, the homestays or teahouses are rather to the basic.

A diverse cultural mix in the lowlands, the villages, further up, gradually become predominantly Limbus and Sherpas an ethnic group known for their bravery. Intriguing can be their traditional attire, fiery foods, and Tongba, an alcoholic drink served hot. Higher up still, the Sherpas take over. These villages, with wooden homes and wooden or stone fences, grow maize and potatoes as their main crops ( at the subsistence level) and see that the livestock consists of mainly the yaks and the sheep.

The length of the route for Kanchenjunga North Base Camp Trek stretches around 100 kilometers from start to finish and is expected to be completed in 13 days of walk. On a daily basis, the average walk is around 5 hours.

Applicable to all foreigners, Kanchenjunga North Base Camp Trek requires an additional special permit issued through a registered Trekking Agency as well as the company of a licensed trekking guide. 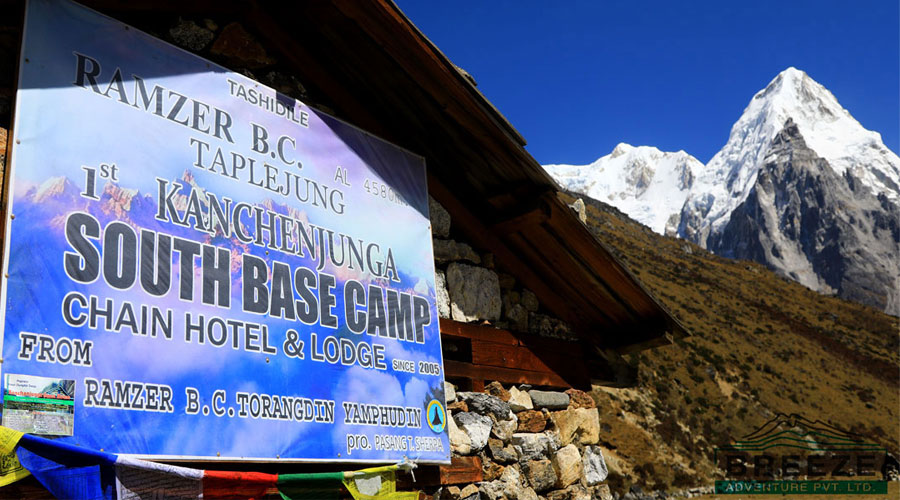 Third, on the altitude scale from the sea level, Mount Kanchenjunga soars high. Of the five peaks, the main stands talk at 8,586 meters. Kanchenjunga South Base Camp Trek takes travelers first to Yalung Glacier (4,580 m). The view of the South face of Kanchenjunga along with other notable peaks (mainly, Kabru, Ratlung, and Talung) from this vantage point is a masterpiece. From here on, the route leads to Kanchenjunga South Base Camp (4,730 m) before the return. The trail, on the whole, sees a lot fewer trekkers even in peak seasons, making this trek a walk in solitude. The remote Limbu and Sherpa villages and pristine wilderness simply add to the experience.

The trail for Kanchenjunga South  Base Camp Trek, one of the remote treks in Nepal, is about 107 kilometers in length and requires 13 days to complete with an average of 5-6 hours of walk each day.

Applicable to all foreigners, Kanchenjunga South Base Camp Trek requires an additional special permit issued through a registered Trekking Agency as well as the company of a licensed trekking guide. 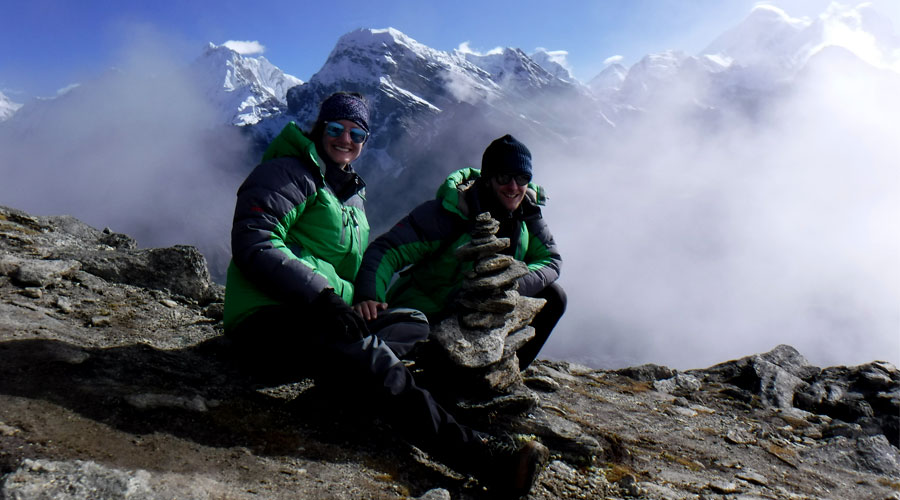 Makalu Base Camp Trek is a trip for those seeking some isolation during their expedition as the wild and remote Makalu Barun National Park is a major part of the trek. The land is known for its rugged terrain and the trail, on its upper reaches, enters an uninhabited glacial valley, very remote places, the Makalu Barun Valley.

The expedition is often organized as a camping trip, owing largely to the remoteness of the areas higher up, which can leave travelers searching even for basic accommodation and sufficient to eat.

Makalu Base Camp, at an altitude of 4,870 m, is barren and rocky with the Barun Glacier just beyond and the south face of Mt.Makalu right in front, further away is a vista that includes Everest and Lhotse. Mt Makalu, at an altitude of 8,485 meters above sea level, is the fifth highest mountain in the world.

Makalu Base Camp Trek comes with a route length of around 70 kilometers. The trek demands walking 5/6 hours a day on average and is expected to be completed in 17days. 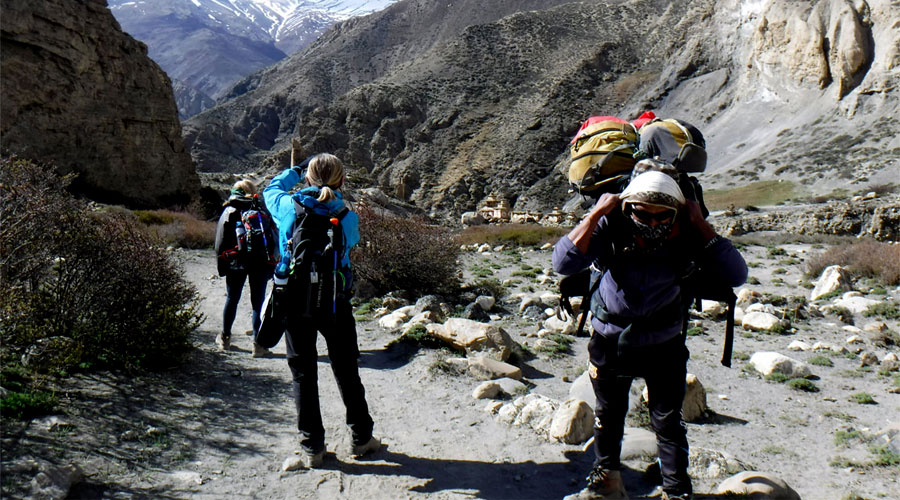 The Manaslu Region opened up for visitors for the first time in 1991. In this land of the Nubri and the Tsum, The ‘Hidden Valley’, the Tsum Valley, remained reluctant, but eventually, let go in 1998. Since then, the region has allured trekkers to its lands.

Still remote, Tsum Valley is holy to the Buddhists with sacred caves and ancient monasteries. On a Tsum Valley Trek, the highest elevation reached is 4,000 meters from sea level at Mu Gompa, the largest of the monasteries in the area.

Entering Tsum Valley requires a special permit issued through an accredited Trekking Agency as well as the company of a licensed trekking guide.

The route length of Tsum Valley Trek is around 105 kilometers. The average hours of walk each day is 6 and the trip is expected to be completed in 15 days. 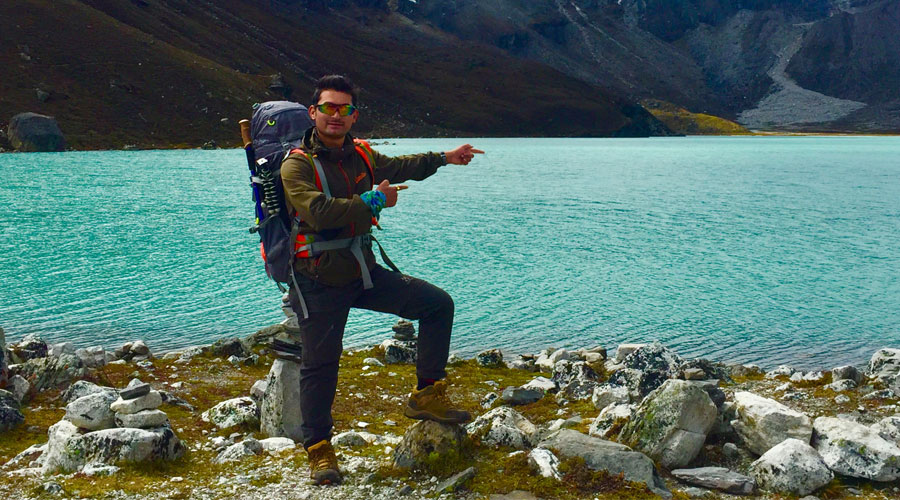 The sparsely populated Dolpo region has a lot on offer for those seeking a remote feel to their trekking experience. One of the two options is the Lower Dolpo Trek. The Trek requires crossing high Passes, Numa-La (5,190 m) and Braga-La (5,070 m), before that rest next to the turquoise blue Shey Phoksundo Lake, located at an altitude slightly above 3,600 meters from sea level.

The population, a mix in the lowlands, turns largely Buddhists at higher reaches. Some of the population still practice Bon Po, a religion predating Buddhism. At the higher stretches of the land, the way of life is still agro-pastoral.

Lower Dolpo Trek comes with a route length of around 120kilometres and is expected to be completed in 15 days. The average walk per day is around 6 hours. 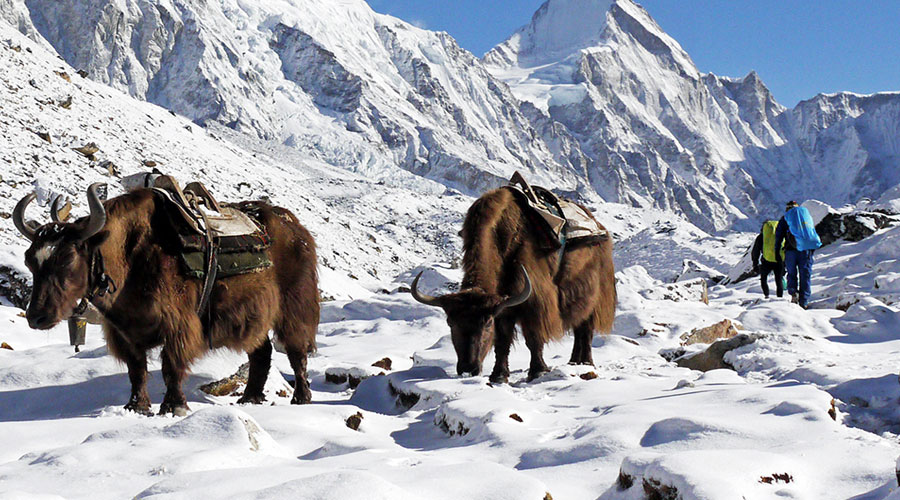 Trekking in the mystical Upper Dolpo Region offers an experience into its remoteness. Although the largest and remote District in Nepal, Dolpo is the least populated. With a vast expanse of wilderness in pristine conditions, the landscape is similar to that of the Tibetan plateau.

With modernity still distant, the way of life, for the sparsely populated villages at the highest altitudes in Nepal, is simple. The largely Buddhist population, who co-exist with the followers of Bon Po (a belief predating Buddhism), depend on agro-pastoral ways. Herding yaks and sheep on horseback is a common practice.

With a trip to Shey Phoksundo Lake first, the Upper Dolpo Trek involves crossing the Kang-La Pass (5,350 m) before reaching the revered Shey Gompa (4,370 m) and beyond to the upper reaches of the land. The return is via the ancient trans-Himalayan trade trail. Parts of the trail still require fording rivers and scrambling on scree. Owing largely to the remoteness of the area, Upper Dolpo Trek is organized as a camping trek.

Upper Dolpo Trek comes with a route length of around 220 kilometers and is expected to be completed in 21 days of walk. The average walk per day is around 5 hours. 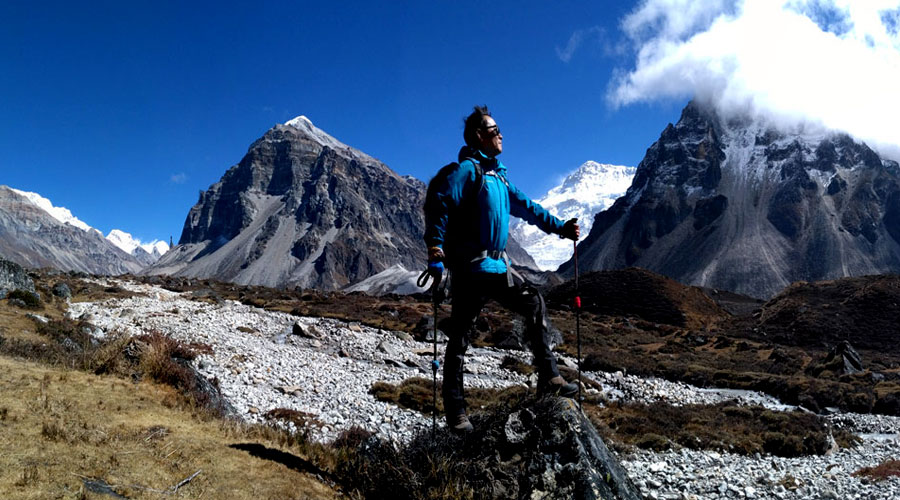 That Dhaulagiri Circuit Trek is a trek in remoteness amidst the Himalayas of Nepal is certainly no exaggeration. The expedition, after all, is largely a camping trek; the one that requires sleeping in tents even on Dhaulagiri glacier itself and on desolate lands above 5000 meters at least on one occasion.

Furthermore, The Dhaulagiri Circuit Trek is a demanding one and is not suited for all. For this reason, the region receives fewer willing trekkers each year. As a consequence, the ones who do decide for this venture get to walk on off-the-beaten paths.

The summit of Mt. Dhaulagiri at an altitude of 8,167 meters from sea level ranks the seventh highest mountain in the world.

With the route length of around 160 kilometers, Dhaulagiri Circuit Trek demands 13 days of the walk for completion. The average daily walk is around 6 hours. 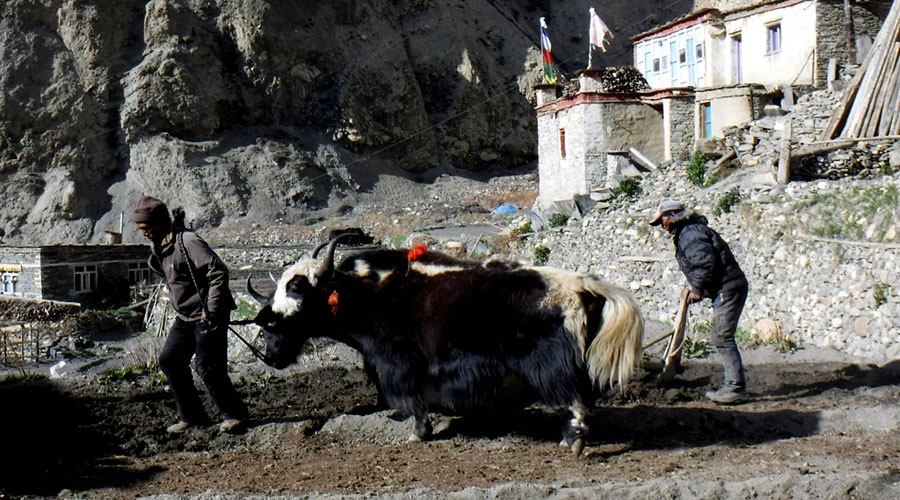 Rolwaling Valley lies between Langtang and Khumbu Himalayan ranges. Quiet even in the busier seasons of Autumn and Spring, Rolwaling Valley Trek presents a walk over numerous suspension bridges over impressive gorges, through dense rhododendron, oak and pine forests, and past waterfalls. This restricted and remote area trek is suitable for all ages people group.

The villages on the trail are populated largely by Tamangs, Sherpas and Chhetris. Rolwaling Valley Trek also involves a hike to a glacial lake at an altitude of 4,580 meters, Lake Tsho Rolpa. The vantage points on the trail showcase magnificent views of Gaurishanker Himal (7,145 m) and others in the range.

On a Rolwaling Valley Trek, the trail of almost 100 kilometers demands 8 days of walk, averaging 5 to 6 hours every day. 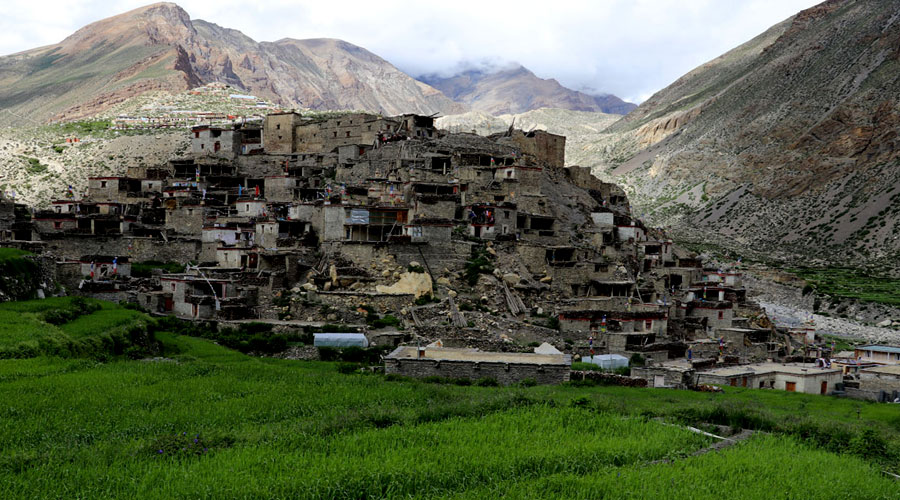 Located to the remote far north of Manang district and tucked between the Annapurna and Manaslu ranges, the unspoiled valleys of Nar and Phu opened up for trekkers only relatively recently, towards the latter half of 2002. The two remote villages, Nar and Phu, are both situated above 4,000 meters from sea level and still remain distant from the influences of modern elements. Practicing ancient Buddhist culture, the villagers live in mud and stone blouses and herd yaks.

Nar Phu Valley Trek takes willing travelers to these still uncharted territories by outsiders. Rock formations, canyons, deep gorges, and stunted juniper bushes add to the appeal. The trek is no miserly to the views of the Himalayas either. From vantage points on the route, the trek offers magnificent views including those of Annapurna II, Gangapurna, Manaslu, Tilicho and Dhaulagiri. Nar Phu Valley Trek also requires crossing a high pass, the Kangla Pass at an altitude of 5,322 meters from sea level.

Nar Phu Valley is a restricted, remote area and, thus, a trek into the lands requires a special permit, which must be issued through a registered Trekking Company. The trek also demands an obligatory licensed trekking guide.

Nar Phu Valley Trek often comes with a route length of around 110 kilometers. Expected to be completed in 10 days, the Trek demands walking 5-6 hours a day on average.