Explore the Ancient Forbidden Kingdom of Mustang Village in Nepal

You have to make a visit to the Mustang Village that was once an ancient forbidden kingdom, especially if you’re a trekking enthusiast, and love exploring new and exciting places. The people who make a trip to Mustang Village are not able to forget it, and this is what makes Mustang Village a great place.

Mustang is actually a district in the western part of Nepal. It is divided into two parts by the Himalayas. The lower part towards the south is called lower Mustang and the upper part towards the north is called Upper Mustang. Mustang Village isn’t really a single village, rather, it is a cluster of villages in the Mustang district. Mustang Village is one of the ideal destinations for you to spend your vacation, as it offers different kinds of experiences to the tourists that make it a point to take a tour here. Mustang Nepal is full of not just natural spectacles, but also religious and cultural heritages. Mustang Nepal is influenced mostly by Buddhism, but since Mustang Village is located so closely to Tibet, you’ll also get to witness an influence of Tibetan Buddhism and Bon religion here, which is a faith that originated in Tibet. Mustang Village is located around the Himalayas, and so, you’ll come across numerous Mustang Valley Nepal. The Mustang Valley Nepal is home to not just people but different species of wildlife and flora. 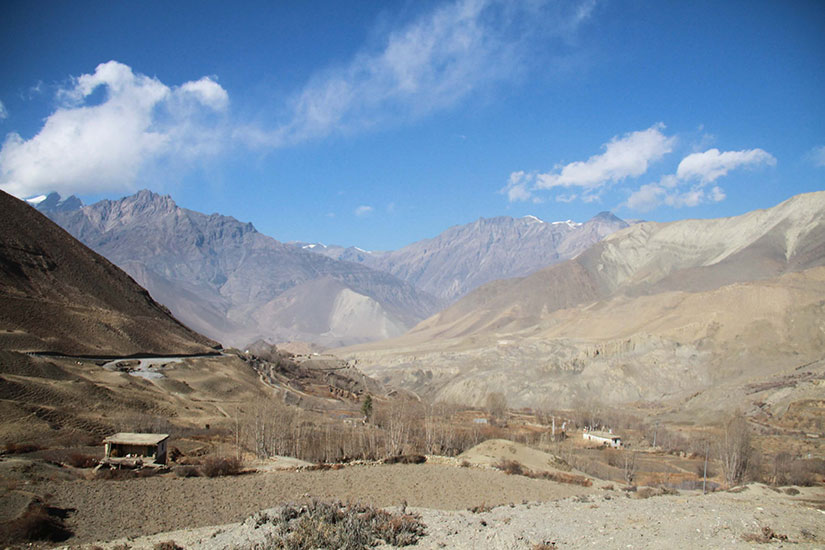 Many address Mustang Village as an ancient forbidden kingdom of Nepal, which has some amount of truth in it. Quite some time back, Mustang Village existed as a separated kingdom, with its own government and monarch. It was few decades ago that the king and royal family officially stepped down from their position, and Mustang Village became a part of Nepal. When Mustang Village was a separate country, it was forbidden for the people from the outside to enter its premises. Special permissions had to be taken, and not everyone was allowed entrance. Even after Mustang Village became a part of Nepal, for quite some time, entry wasn’t allowed to the outsiders. Forget about the foreigners, even the Nepali nationals weren’t allowed entry. At this moment, when accessing this place is so simple, all this sounds like a legend. But an interesting legend overall that will be passed on for generations.

It is crucial that you carry Mustang Nepal map with you during your visit to Mustang Village. With the help of a Mustang Nepal map, you’ll be able to explore the entire region on your own. There are so many attractions that Mustang has to offer to you, and a lot of them don’t happen to be on the main route. When you have a map in your possession, you can go on side treks and explore each and every one of them, provided that you have the time. Owning a map also prevents you from getting lost on the way, which is highly unlikely in the first place. And even if it happens, you will be able to find your way back to your group, or head on to the next destination. Mustang Nepal map also give you all the information that you need about the route, and the entire region altogether. With all this knowledge, you will know what attractions or challenges await you, so that you can anticipate or prepare for them respectively. Make sure to have a map of Mustang region in your possession way ahead of your journey.

Upper Mustang trek takes you to the infamous region of Upper Mustang, which is also known as the land beyond the mountains. The main attraction of the trek is the walled city of Lo Manthang, which was once the capital of the region. It is for this region, the trek is also known as Lo Manthang trek. Upper Mustang trek or Lo Manthang trek is a 17 days long journey altogether, which includes 10 days of trekking. During this time, you’ll cover places like Kagbeni, Chele, Tsarang, Geiling, Samar, and so on. During this time, you will get to enjoy the dry and arid landscape and unique cultures. Since the region is bordered by Tibet, there are lots of similarities between the two areas. The thing that makes Upper Mustang trek the most unique trekking journey in Nepal is that during most of the time, you’ll have to look south to view the mountains. Walk on and you’ll reach Lo Manthang, where the royal family lives like common people. If you’re lucky, you’ll get to have a great conversation with the king himself.

During the Lower Mustang trek, you cover the region of Mustang District that is either south or east of Jomsom. You have the option of either reaching Jomsom Nepal in a flight, in a bus, or by trekking. Apart from Jomsom Nepal, which is a beautiful village lying on the bank of Kaligandaki River, you also get to visit Muktinath Temple, which is a pilgrimage site significant for both Hindus and Buddhists. The temple is dedicated to the Hindu god Lord Shiva, and every year, thousands of pilgrims from all over the world visit the place. As you visit this religious heritage during your Lower Mustang trek, the journey is also named as Jomsom Muktinath trek, or Muktinath trek simply. During the Jomsom Muktinath trek or Muktinath trek, you will come across two kinds of landscapes, the greenery towards the south and dryness towards the north. Mustang is infamous for the high velocity winds that blow in the early afternoon. Despite all this, it’s an absolute pleasure to visit this place. You will definitely love the trip. 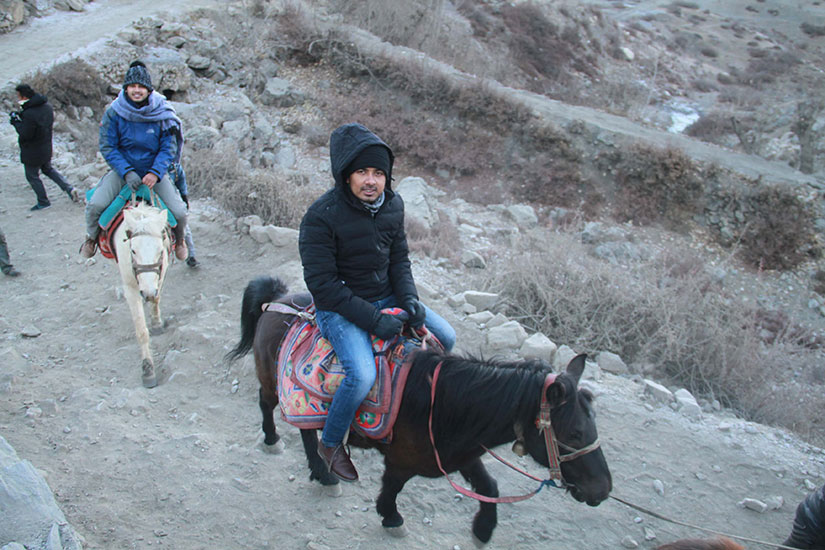 Annapurna Circuit trek is probably the best way to explore the Annapurna region, Annapurna Conservation Area, and mainly Mustang Village. From forests and villages to mountains and passes, most of the natural spectacles that are a part of Annapurna Conservation Area is covered in this trip. The trek doesn’t just cover Mustang Village but also other places like Dharapani, Chame, Manang, Marpha, Sikha, and so on. Altogether, it’s a 19 days long journey, however, the core trekking days last for a duration of around 13 days. One of the most challenging points of the trek is Thorung La, a high altitude mountain pass situated at an elevation of 5416 m. If you love mountain views, this is probably the best option for you, as you’ll get to enjoy views of peaks like Machapuchhre, Manaslu, Dhaulagiri, and the ones in Annapurna massif. You also get to explore the villages of Ghorepani and Ghandruk, and the view point on the top of Poon Hill in the Annapurna Circuit trek. This is, without a doubt, a complete trek. 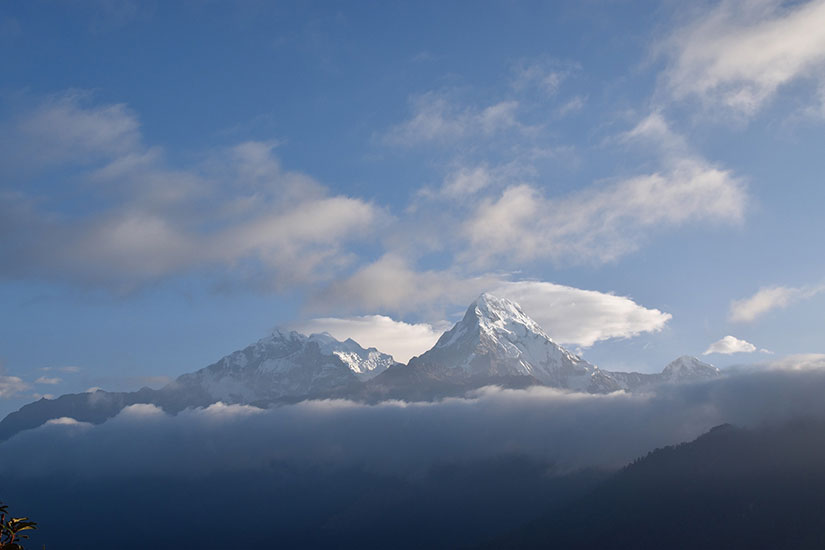 Mustang Village, which was once an ancient forbidden kingdom deserves to be on your bucket list. Based on all the information mentioned above, you can be quite confident that you are going to have the most amazing time during your journey to Mustang Village, and while you stay here.

Breeze Adventure is one of the best travel and tour operators in Nepal. They specialize in trekking and expedition journeys, but if you feel that you’re not made for these physically straining travel packages, you can opt one of their luxury tour packages. The best things about their itineraries is the fact that they cover popular and as well as off the beat places in countries like Nepal, Bhutan and Tibet. If you’re not quite satisfied with the itinerary, you can suggest changes as per your interests, and they’ll happily accept it as far as practical. They’re experienced, affordable, trustworthy, and they ensure that you have the best possible time during your journey. If you’re looking to visit any of these Himalayan countries during your next vacation, make sure to contact Breeze Adventure. You can be rest assured that your holiday with them as your travel partner is going to be one of the most memorable experiences.