The hidden village of Phu lies 45 kilometers away from Chame. Like Nar, the village is a cluster of connected stone and mud houses, which look like they have been frozen in time from an ancient era. Sometime around the 10th century, Tibetan herders and traders established a village in Phu and despite how cut-off it is from the outside world, it has astonishingly remained inhabited for about 1,000 years. You will be pleasantly surprised by the hospitality and kindness of the locals. Of the roughly 100 households, most of them rely on farming to make a living, using yaks to plow the land. They subsist on potatoes, barley, buckwheat, and some vegetables. When you see how happy the locals are with their basic lifestyle, it makes you ask yourself where you are looking for your happiness… 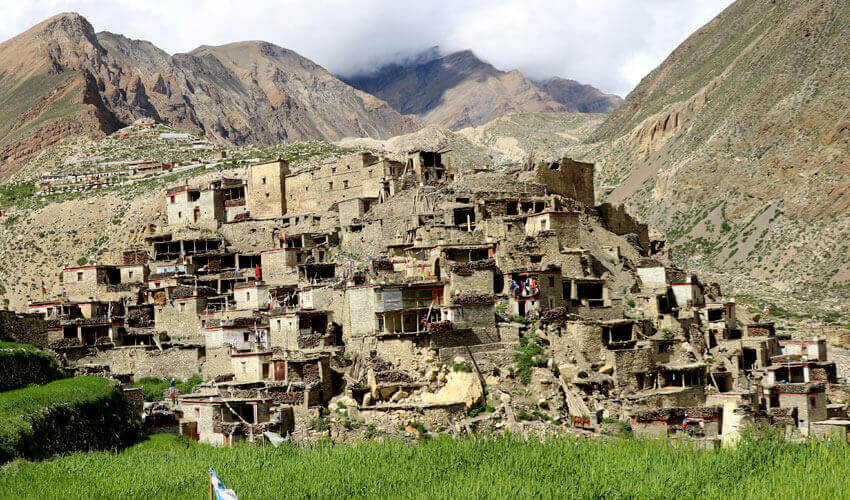 Approaching Phu from a distance creates a great sense of anticipation to arrive and spend a few days here. Throughout your stay, enjoy breathtaking views of Himlung Himal, Pokhar Kang, and lots of other snow-capped peaks. Most trekkers spend two nights in Phu because there is so much to see, and it also works as an acclimatization day as well. There is a total of 5 monasteries in and around the village. Within about 20 minutes, you’ll reach the biggest one – definitely worth checking out. In the middle of the village lies an ancient royal palace, which was damaged by the 2015 earthquake, but is currently under renovations. Also during the acclimatization day, you can climb up to Himlung Himal Base Camp or to the recently built Phu Village Viewpoint, which offers incredible views of the village down below and jagged Himalayan peaks in the background. So, take a journey back in time and enjoy the slow-paced life in Phu village! 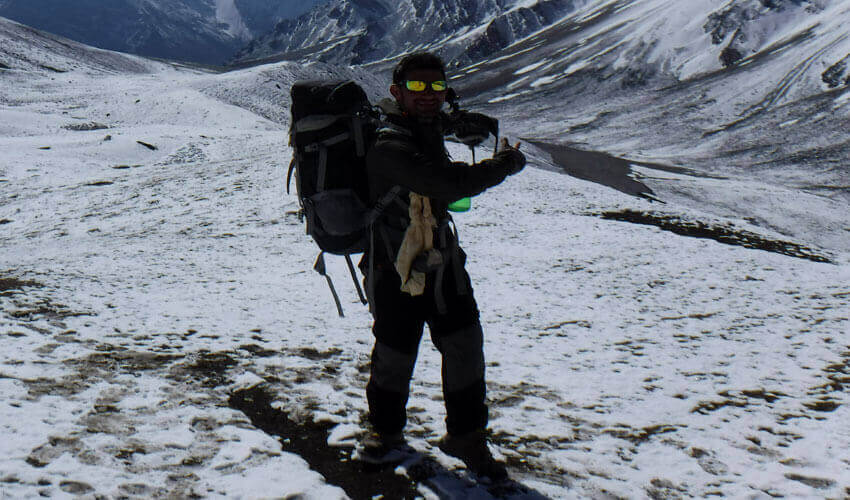 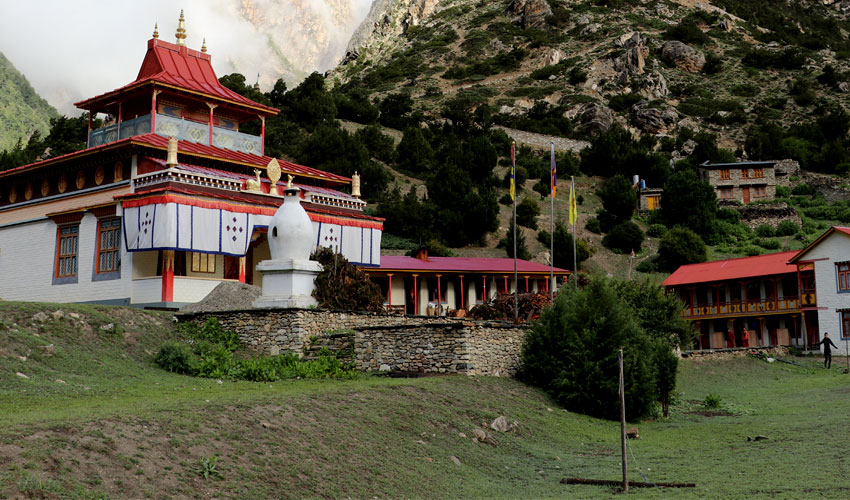 Satek Gompa is located below Nar village, alongside the Phu River. You couldn’t even dream of the peacefulness of this place. There is very little known or written about this monastery, which adds to its mystical allure.  On the way from Phu to Nar, you get the privilege of staying a night here. Inside the colorful exterior of the guesthouse is a sleeping area for trekkers and other guests who wish to learn a bit about the daily rituals in the monastery.  During festival time, lamas come from Kathmandu and beyond to celebrate. During the summertime, classes are held for around 15 to 20 monks-in-training. Due to the climate here, the students shift back to Kathmandu for 5 months of the year.

It is an incredible experience to stay at Satek Gompa, live in the midst of monks and observe their daily lifestyle. The monks prepare your food and make you feel welcome in their mountain home. It is awesome to be able to participate in the daily pujas, which happen in the morning and evening. Meditating while the monks chant and play their ritual music creates positive vibes for your mind and body. There is no better way to start your day than meditating in a Buddhist monastery in the middle of the Himalayas. For many who take the Nar Phu Valley Trek, this is one of the most memorable stays. Rooms at the monastery are limited so it is necessary to book the room in advance. 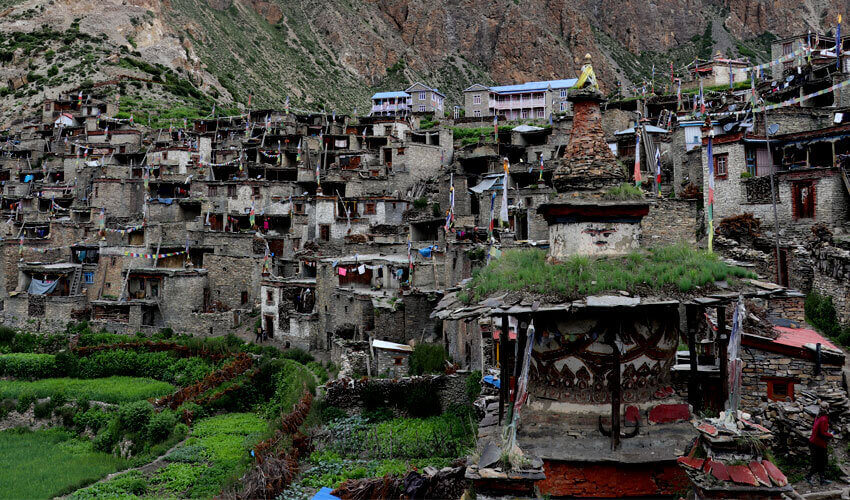 Nar is a beautiful village located just below Pisang Peak. The tiny establishment stands at the top of a hill, from where you get awesome Himalayan views on both sides. It takes about 10 hours of walking from Chame to reach the village, and it is only a scenic 3-hour walk from Satek Gompa. Nar village was first discovered by hunters who were in the area searching for food. Most of the locals are ethnically Tibetan, so their religion and daily activities are rooted in Tibetan culture. It is said that the inhabitants of Nar are believed to be from Tibet’s ancient Shang Sung Kingdom, arriving in the area around the 8th century. They converted from the mystic Bon religion to Buddhism after the birth of Buddha in Lumbini.

The village consists of about 100 houses, all connected and built from mud and stone. The farmland at the lowest part of the village appears to be an oasis in an otherwise arid landscape. Yaks are used to plough the fertile farmland. Potatoes, barley, and all sorts of vegetables are grown here, and the locals are still practicing subsistence agriculture. The residents of Nar are exceptionally friendly and always greet visitors with a genuine, innocent smile. Tibetan Buddhism is practiced here and there are five historic monasteries in the village. There is one school in the village, though most kids are sent to Pokhara to receive a better education. As of recently, Nar village now has electricity, so it is possible to charge your phones and cameras to make sure you get awesome shots while climbing the Kangla Pass. From the village itself, the sunset and sunrise views are something you won’t ever forget. 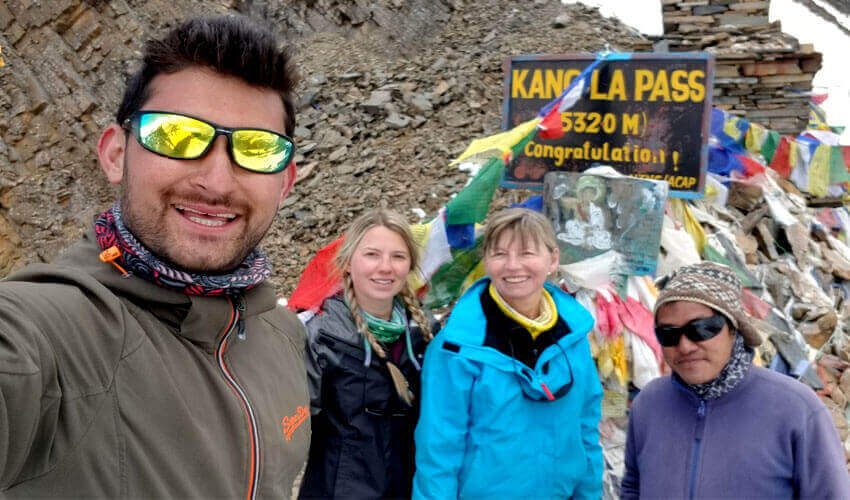 The major attraction of the Nar Phu Valley Trek is crossing the Kang La Pass (5320 meters/17,454 feet). This passes is totally unique and offers an eagle-eye view of Annapurna and Manaslu region Himalayan peaks. The high pass is reached after about 5-6 hours of walking from Nar village. The trail from Nar starts with a gentle uphill through expansive grasslands with awesome views of Manaslu straight ahead, Pisang Peak on the left, and Chulu Central and Chulu East on the right-hand side.

After walking for about 3 hours, we arrive at Kangla Phedi, where you take a short rest. There is nothing between here and the pass, so it’s good to have a little snack before walking uphill for another 2 hours. Just before reaching Kangla Pass, you have a beautiful view of a heart-shaped glacial pond, sending you a little love and energy to keep climbing. From here, climb another 40 minutes to the top. This pass is not recommended in the winter, because there can be heavy snow for days at a time, making it impassable.

From the Kangla Pass, enjoy crisp views of Annapurna I (8090m), Annapurna II (7937m), Annapurna III (7555m), Annapurna IV (7525m), Gangapurna (7455m), Dhaulagiri (8167m) and more. Snap some photos and take some deep breaths of the cool mountain air before heading down. Because the trail from Kangla Pass to Ngwal village is super steep, crampons and ice axes are recommended to ensure your safety. It takes about three hours to reach Ngwal from the pass. The trail is all rocks for about an hour before the well-maintained section begins. The view of Manang village and the Annapurna region Himalayas from the trail is a huge perk of this trip. It is also possible to see some rare Blue Sheep on the trail. After you pass a beautiful stupa, Ngwal village appears. Stay in one of the lovely guesthouses in the village and enjoy a perfect morning sunrise over the grand Himalayas. You won’t want to miss this! Click here for the detail of Nar Phu Valley trek.