Kanchenjunga Trek | Exploring The Five Treasures of The Snow

Some frequently discussed topics regarding Kanchenjunga trekking are:

There is a folktale that surrounds the idea of the five treasures of snow. It is believed that the gods hid treasures such as gold, food, medicine, sacred scriptures and ammunition underneath these snowy peaks. These riches would prove to be of extreme importance and value to the humans in the post-apocalyptic world. Since the number of treasures buried were 5, and they were buried under the snow, the legend became popular as the five treasures of the snow. Trek to Kanchenjunga is a medium for you to not just explore the regions, but also the folktales and stories as such that revolve around Mt. Kanchenjunga. 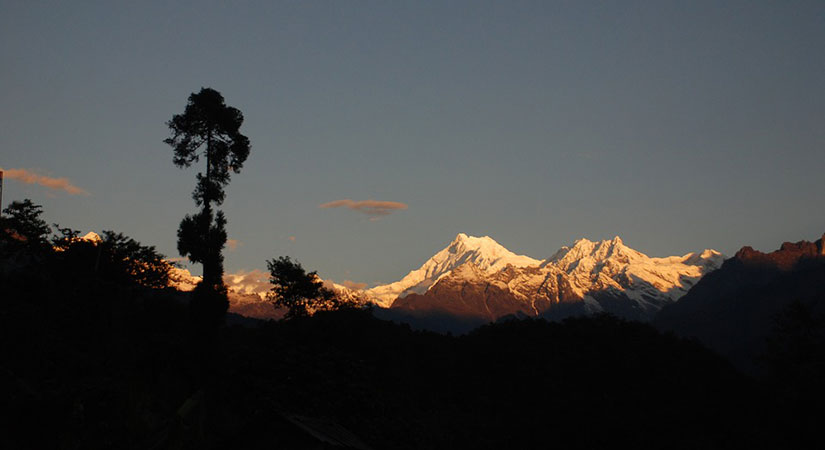 Kanchenjunga trek is one of the most challenging and adventurous treks in Nepal. What make it so tough are the high altitude, the extreme climate, and the rough terrain that the trekkers come across during their trek. On top of all that, Kanchenjunga trek Nepal isn’t as developed as other trekking routes so the standard of services available for trekkers like accommodation, food, and so on, are quite rudimentary. This makes the trek even more challenging, but that’s not enough for certain individuals. Many thrill seekers tend to take the difficulty of Kanchenjunga trek up a notch by going on the trek of Kanchenjunga on their own, or by going on a camping trek rather than a tea house trek.

Kanchenjunga North Base Camp trek starts from Suketar. From here, the trekkers move north east crossing villages like Amjilosa, Ghunsa, Khambachen, and so on. Finally, they reach Pang Pema, which is regarded as the Kanchenjunga North Base Camp. The trekkers rest here for the night, and on the next day, early in the morning, the trekkers head towards the nearest ridge, which offers the most amazing views of the region. Here, they spend only a couple of hours, after which, they head back to Suketar.

Most of the people in the region follow Tibetan Buddhism, so, throughout the trekking journey, you’ll find structures influenced by the religion, such as mani walls, chortens, stupas, prayer flags, and so on. Another major highlight of the trek are the wonderful views of the mountains, mainly Kanchenjunga, Khabur, Phole, Jannu, and so on. Throughout the trek, you’ll find viewpoints, standing on top of which, you’d be able to admire these majestic peaks.

The setting at different locations during the journey is another element that will fascinate you. You’ll find yourself walking through the forests of rhododendron, pine, oak, bamboo and so on. The dense jungles, combined with scenic waterfalls and rivers that you’d witness at regular intervals, would make you feel as if you’re a part of a fairy tale. You’d want to stay here forever.

Kanchenjunga South Base Camp trek starts from Suketar, quite like Kanchenjunga North Base Camp trek. From here, the trekkers head northeast, and after crossing villages like Mamankhe, Yamphudin, Tseram, and so on, they reach Ramche. This is the mid-point of the trek, and as far as one goes on this trek. From Ramche, it’s the same way back to Suketar, where the trek comes to an end. One day is assigned for rest at Ramche, and it’s on this very day that the trekkers visit Kanchenjunga Base Camp. They spend a couple of hours here, and enjoy the most amazing views of peaks like Jannu, Mera, Anidesha, and so on.

Quite like Kanchenjunga North Base Camp trek, Kanchenjunga South Base Camp trek is also a part of Kanchenjunga Conservation Area. On your trek, if you’re lucky, you might spot rare animals like Himalayan Tahr, Himalayan Black Bear, Musk Deer, and so on. You’ll make your way through the forests, so be prepared for some visual treat in the form of beautiful flowering trees, and other rare plants.

On the trek, you’ll also come across rivers like Amji, Kabeli, Simbua, and so on, and numerous waterfalls, with fresh cold clear water flowing in them with great pace. When you go higher, you feel the vegetation getting scarce, and the environment getting dryer and whiter. You’ll spot glaciers as well, most importantly, Yalung glacier, Kumbhakarna glacier, and so on.

Side Treks on the Kanchenjunga Base Camp Trek Route

One of the most prominent side treks on the Kanchenjunga Base Camp trek route is the one on Kanchenjunga North Base Camp trek route. In terms of returning from Pang Pema to Suketar, instead of heading south from Ghunsa to Gyabla, the trekkers have the option of heading west instead towards Olangchung Gola. On the trek, the trekkers cross Nago La, a mountain pass situated at an altitude of 4820 m, and Magawa, a small yet serene village. This side trek route joins the main route at Lelep.

Another crucial side trek in the region is not really a side trek, but rather an opportunity to double the fun and adventure in your trek. A lot of trekkers, after they’re done trekking on the Kanchenjunga South Base Camp trek route, tend to include the Kanchenjunga North Base Camp trek route in their itinerary, and vice versa, so that they can have the goodness of both the base camps and the other locations and attractions on the trekking routes in a single journey.

One of the ways to make Kanchenjunga Base Camp trek quite extreme is to go for Kanchenjunga Base Camp trek solo. As there are not many accommodation and food related facilities on the route, the trekkers are required to carry tent, grocery, stoves and so on, so that they’re able to set camps on the way. All these things seem feasible when the trekkers are walking in a pack. Imagine how hard it would be if a trekker tries to manage all this on his own, while he’s trekking alone on the route. It’s not something that’s impossible, as quite a few trekkers have trekked on this route solo, and emerged victorious. However, it’s not something that’s everyone’s cup of tea, so go for it only if you’ve tried something like this in the past, and if you’re quite confident about your skill set.

Kanchenjunga Base Camp Trek Circuit requires 21 days altogether to complete, and in this time, the trekkers cover a distance of around 864 km. Kanchenjunga Circuit Trek North to South offers the most wonderful views of mountains such as Makalu, Kanchenjunga, Everest, and Lhotse, four of the five highest peaks in the world, along with the other peaks in the Kanchenjunga region.

Along with the route, the trek also assembles all the people, their cultures, the villages, the settings, the viewpoints, and all the other attractions found in them. 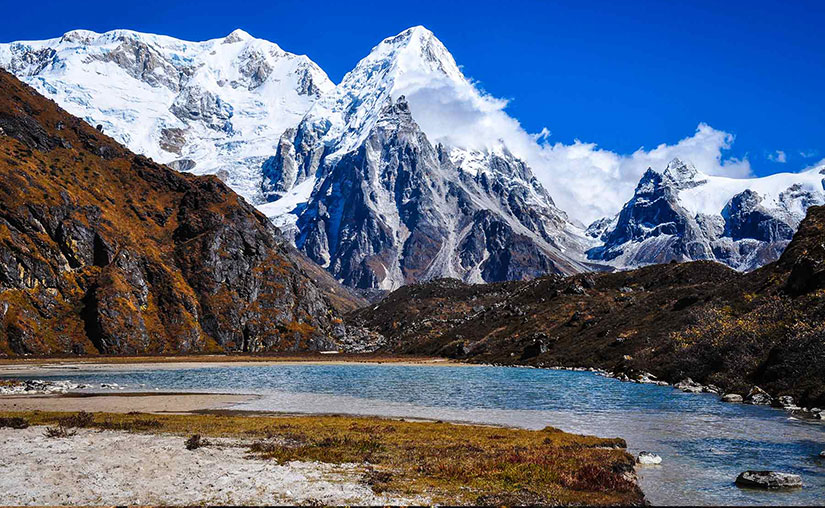 Kanchenjunga Trek Map can prove to be quite significant while you’re trekking on the route. It’s well established that maps don’t just help you find your way, but also assists you to understand the area completely. With a Kanchenjunga Circuit trek map you can be sure about the places you’ve been to and the places you’re going to be at. Kanchenjunga Trek map prepares you for all the attractions that’ll come your way, and gives you that freedom to explore the region on your own. There are so many side trips in the Kanchenjunga region, and with a map in your hand, you can take the decision on which side trips to go for and which ones to avoid, as you know about the area completely. So make sure that you own a Kanchenjunga Circuit trek map, well in advance, before going for Kanchenjunga trek.

Kanchenjunga trek difficulty level is quite challenging. Quite like other trekking routes, what make Kanchenjunga trek difficult are the rough terrains, the high altitude, the climate and weather, altitude sickness, and so on. The trekkers need to be at a certain physical prowess to get across these challenges and beat this trek. Apart from these, another factor that makes the trek quite a difficult one is the rudimentary level of services like accommodation and food. Due to this, the trekkers have to carry a lot of equipment, and manage things on their own, which adds to the challenge up to a great extent.

Kanchenjunga trek difficulty can be reduced quite fairly by maintaining physical fitness, and preparing for the trek. The impacts of Altitude Sickness can be reduced be taking enough rest, avoiding drinks such as alcohol, and consuming food items such as garlic soup. By hiring porters to carry the equipment, the burden of the trekkers can be reduced tremendously. It’s a different thing trekking on these path, but doing so with a heavy load on your back can prove to be quite excruciating.

If you’re someone who’s got quite a bit of experience trekking on various terrains and climatic conditions, but are looking to take the sport to a whole new level, Kanchenjunga trek is definitely the one for you. It will pose as a challenge in front of you, but at the same time, after you’re done with the trek, it’ll offer you the memories that would be worth retaining throughout your life.

Breeze Adventure believes in making your trek adventurous and full of fun. For challenging trekking journeys like Kanchenjunga trek, Breeze Adventure is the best partner to have. They offer you the best travel related services, at the most affordable price. They are trustworthy, as they are one of the most experienced trekking companies out there. Apart from trekking, the agency also offers tour packages to the most popular tourist destinations across Nepal, and neighboring countries like India, Bhutan and Tibet. Look out for Breeze Adventures for all your travel needs in the countries mentioned above.